The biggest surprise during my pregnancy besides baby was Matthew surprising me with a puppy.

Most husbands would think, hmm maybe a puppy for my hormonal, tired, can barely bend over wife isn’t a good idea right now.. but not Matthew!

For those of you still trying to convince your significant other to get you a puppy, studies show that homes with furry pets, like cute little Mac, produced babies with higher levels of good bacteria that’s known to fight obesity and allergic diseases. Another positive, was Mac giving us some practice before the baby… midnight bathroom runs, feedings, grooming, and training… we were sleep deprived before the baby came!

We trained him fast; he rang a bell whenever he needed to go outside, he sits, shakes, lays down, and goes to his bed when we tell him to. The ONLY thing we couldn’t really “fix” was, and is, his over-excitement when guests come over; so introducing the baby to the puppy loomed over me for the remaining 20 weeks of pregnancy. How will he react to a new little human moving into HIS house, one that cries, poops, and steals most of our attention? Part of me was relieved because I had grown up with Labs and knew they’re America’s most popular dog breed. Super loyal, loving, smart, and great with kids…. but still… I couldn’t help but think, was Mac the exception? 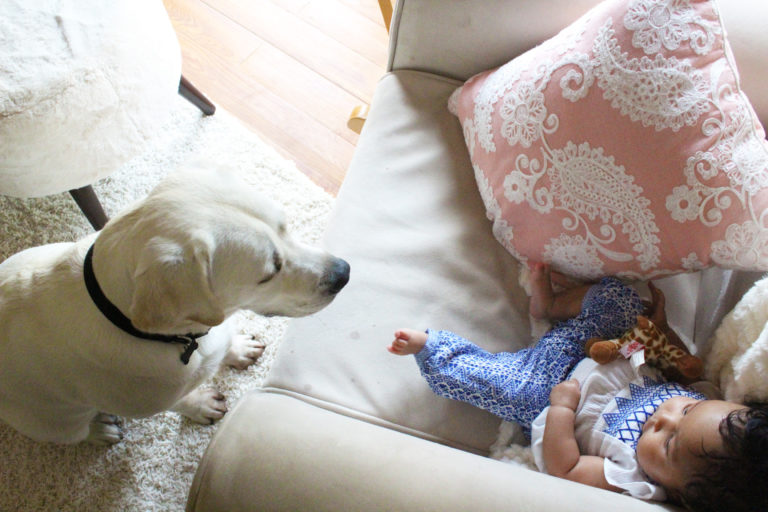 Well… he was not the exception. He is great with Pia! Stares at her while she rocks, gives us a concerned look when she cries (or maybe it’s a “are you going to shut her up” look?), and sleeps right next to her crib at night. Besides stealing our attention more than he’d like, I believe Mac loves her and will be Pia’s first best friend. 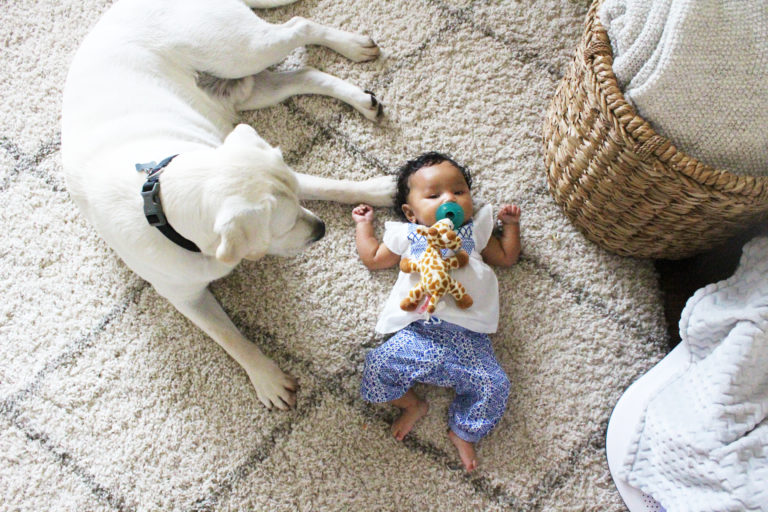 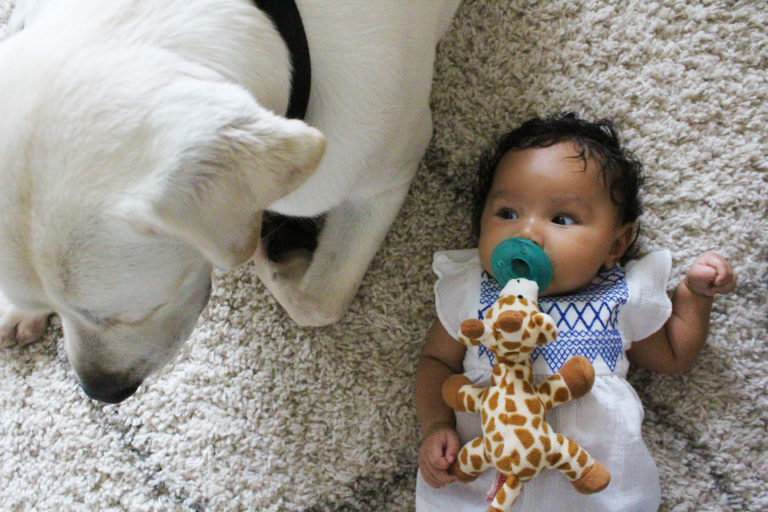 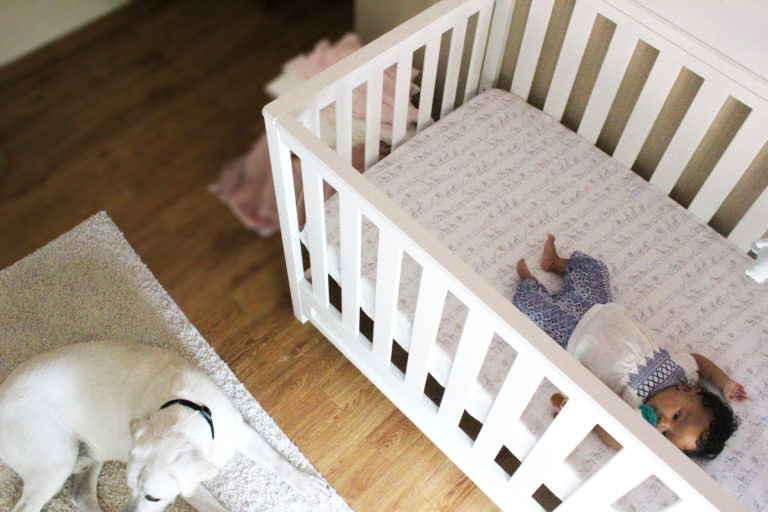 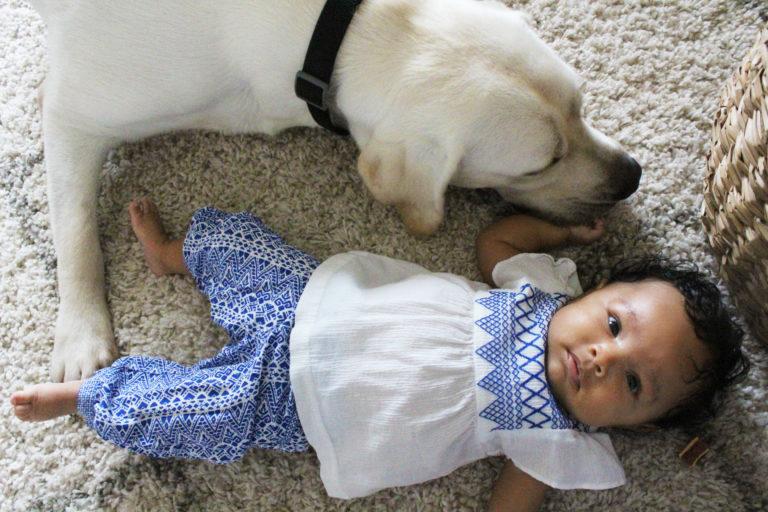 Here are some tips from our experience in commingling puppy & baby:

1. Let him explore the baby’s room

Getting him familiar with the scents of her lotions, clothes and toys helped get him acclimated to new things in his house. We let him come in her room before she was born but made sure he sat or laid down, that this was a quiet calm area. 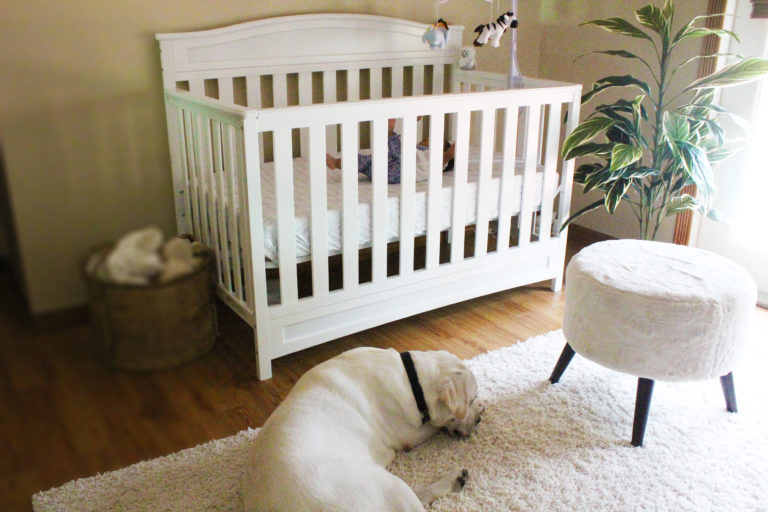 2. Introduce the baby to him outside the house

A coworker told me to bring a piece of her clothing she was wearing home from the hospital and let him sniff it before we brought her home. We also brought him outside to meet her before bringing her in the house. Let him sniff her while on a leash and get an introduction before entering the house. 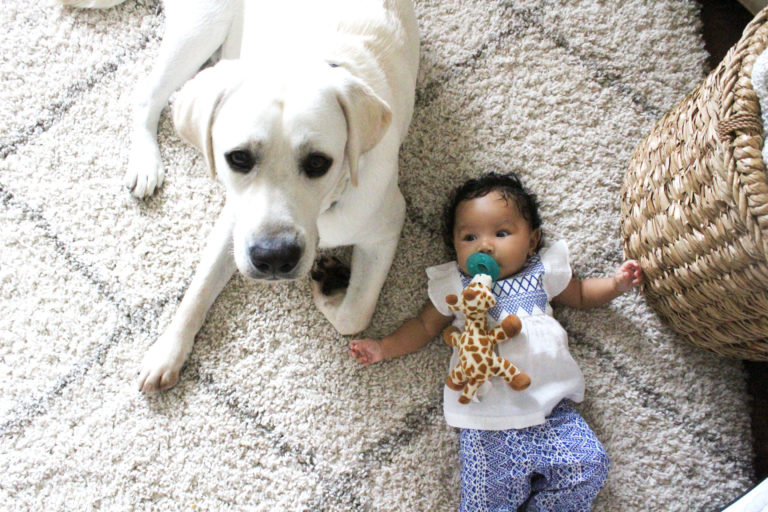 3. Give him attention too

We slowly gave him less and less attention as we drew near to the baby’s arrival so he did not associate the change to the baby. However, we spent a crazy amount of time just staring at her (took A LOT more of our attention than we thought) and noticed weird behavior from him when we slacked on Mac time (like ringing the bell to go outside every two minutes). He’s still a puppy and needs love too… we can’t forget, he was our first baby. 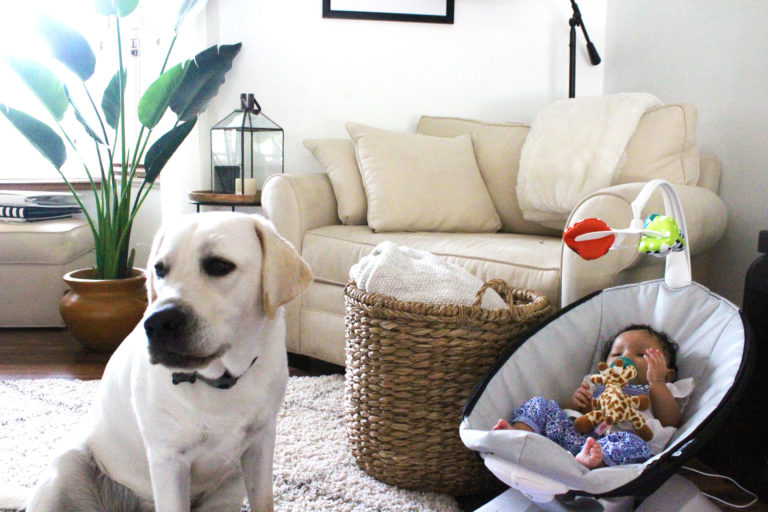 Labs always want to learn; continuing to treat him for good behavior helps him relate the new baby to a positive undertaking. 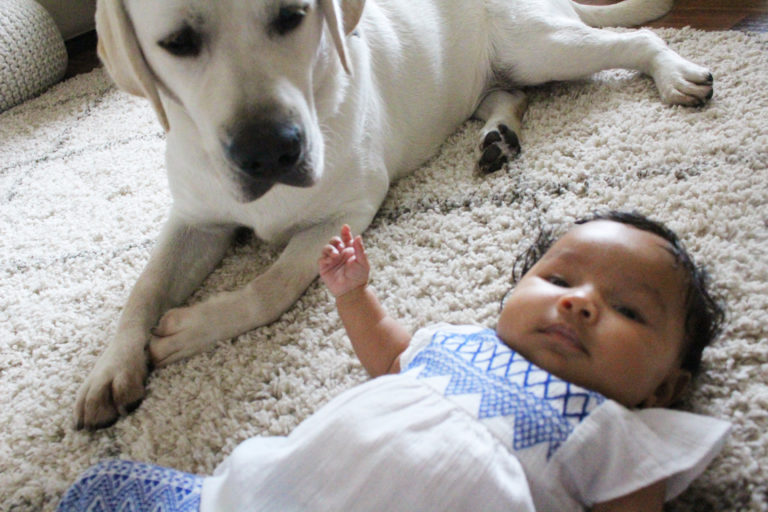 5. Keep to your routine

Dogs need a routine like new parents need sleep. I mean… they’re dogs. The only things they look forward to is seeing their master and getting fed. We stay strict on our feeding schedule for Mac just as much as we do Pia. 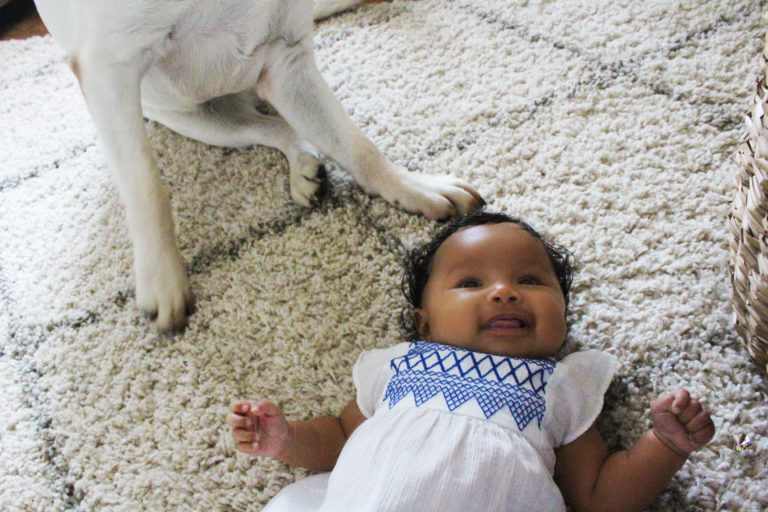 What kinds of dogs do you have? Any advice on baby & puppy interaction?

P.S. A cheap but uniquely creative baby shower, and how to surprise your parents with baby announcement.